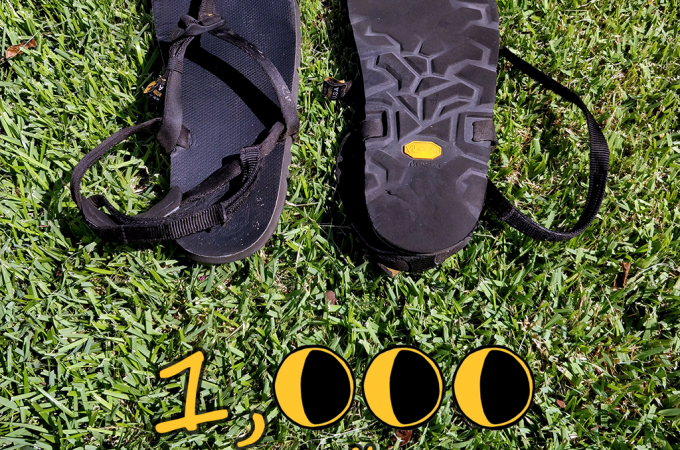 "Dude, you're running in those?!"
"Tarzan!"
"Jesus Sandals"
"Doesn't that hurt your feet?!"
"You know they still make shoes"
"That guy's running flip flops!"

Yep, I've heard it all when it comes to the recent-ish decision to abandon running shoes in favor of my Luna Sandals! And if it hasn't been expressed verbally, I certainly can see the expression on people's faces as I'm rolling down the boardwalk or one of my favorite local running spots! 9 times out of 10 the conversation normally steers to why I am running sandals. So while I'm chilling on my couch after a fantastic weekend of participating in the Rock 'n' Roll Half Marathon activities, I figured: why not make a quick blog post!

Before I get into why - let me directly address a few of the most common curiosities:

If you had the chance to check out my blog post 96 Miles of Pura Vida you'll recall I mentioned how destroyed my feet were after 6 days of running in the Jungle, through rivers on the beaches of Costa Rica. I had terrible blisters, I bruised nearly all my toenails and I my feet were swollen for a good week after finishing. Meanwhile Andrew Snope (Luna Ambassador and 24-hour World Record Holder for barefoot running) and Pablo Rodriguez (the owner of Run the World Adventures) both wore Luna Sandals and I took notice to the fact they were largely fine. My curiosity was peaked and before parting ways with Andrew I got a bit of encouragement to try a pair. So I made a plan to order a pair to "play around" in with the idea I wouldn't likely run any long distances in them.

I spent the better part of a week going back and forth with the awesome folks at Luna about what might be a good pair for me knowing I'm mainly a road runner with the occasional light trail such as back in First Landing. The Mono 2.0's were just coming out and they are one of the more versatile sandal's that Luna makes. They have a light tread suitable for trails but not so aggressive they would affect running on the road. They are about 11mm thick, and an additional 4mm tread height bringing them to 15mm total. This is pretty similar if not even a bit thicker than my normal training shoes so I figured it would be a similar feel. The sole is made from Vibram® Morflex which is a lightweight, incredibly durable and even shock-absorbing material (which is why pulling off quite a few more miles is possible). That sorted: I placed my order and patiently waited for the shipment.

It was shortly after I finished up the Run Until You Drop challenge that I figured while I wasn't training for anything serious that I could afford to play around a bit. The sandals had arrived so I wore them around for a few days akin to flip-flops to try and break them in a bit. I decided my first spin running would be down the Cape Henry main trail so I could get a feel for what it was like running in sandals and see how my body held up. I went out for about 20 mins. as I felt and really, had a pretty good run! I averaged my normal pace going out, and then picked it up a fair amount coming back just to see how responsive they would be. They were without a doubt stiff and I was also catching the front part of my left shoe every now and then. Overall the test was a success. I definitely had learned I needed to give myself some time to get used to the stiffness. I also learned I needed to run a bit more deliberately as your feet are quite exposed and I needed to my feet to get used to the sandal straps and base.

For the next several weeks I mixed the sandals in with my trainers, running between the trails and introducing some pavement running. Quick aside and in full disclosure - anyone who has run around me on the pavement knows they tend to be a bit noisier on the pavement. Sorry! Each run I was going a little further, pushing a little harder and feeling stronger. Not to mention: I was getting a little more encouragement from my running buds to push the envelope a bit (you know who you are!) I'm not entirely sure if that was just to see how crazy I really am, disbelief or some combination of the two! In terms of my feet adapting I had a few hot spots from the straps and the rubbing between my feet and the base but those subsided fairly quickly. I stopped catching my left sandal after I wore down the front a bit which I imagine is pretty common.

By late March/early April I was doing about half my runs in the Luna's and had signed up for the Run for the Animals Half Marathon. My plan for this run was to average about 10 seconds below my Marathon pace as a test of my fitness. This was also a big test of the sandals as I had made the decision to give racing a go in what would be the longest distance to that point. I ended up having a fantastic run! I felt comfortable and confident running at a faster pace. I ended up averaging 6:57/mi which is about 10 seconds lower a mile than I needed to but I was really just having a good ole time and not stressing anything!

I digress. That last part is super-duper important: having a good ole time. I can't really describe the sense of freedom I get when I toss my sandals on and go for a run. There is no complexity, no angst on what shoes I should wear or if I've got a pair of clean socks. 2017 has been the year I've really connected with my passion for running - exploring the world around me on my feet and not stressing so much about race times or training. And in some way the sandals have helped reinforce that.

Back to after the Run for the Animals: the next target would occur about 2 months later when I decided I was running so well I needed to take a shot at a Boston Qualifier . I had great success with the Luna's at the Half so naturally, I continued to wear them more and more even during quality training runs where pace was an important factor. And every run the sandals were breaking in a little more, feeling natural on my feet and I was getting that much more confident. Finally I started to wear them on my 18-20 mile long runs and aside from a tad more fatigue than normal I felt great.

I had a big decision ahead of me. Training was going so well, the weather for the Marathon was looking perfect and I was feeling confident like all I needed to do was just go out and run and I had a BQ in the bag. Should I wear the Luna's? I was confident but it was 10k longer than I had trained and what happens if the one factor that holds me back from qualifying was the decision to run in sandals?! I remember sitting at our weekly Beer School a couple days before heading out of town talking to Steve Speir's. And I basically asked him: sandals or shoes? Much to my surprise he said: sandals! So I left it up to fate - a coin toss if you will. The thought plagued my head for the next few days and I brought a pair of shoes just in case I wanted to change my mind. 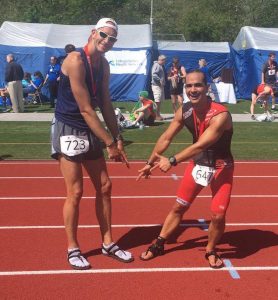 I was sitting in the gym race morning keeping warm and race nerves were playing with me. I had my sandals on and was ready to go - but my shoes were sitting right next to me. 30 minutes before the start the nerves got the better of me and I had decided to abandon the sandals and wear my familiar shoes. I couldn't risk it! Wouldn't you know at that very moment a runner by the name of Chalo was walking by - in a pair of Luna's! I had not seen anyone in sandals since visiting Costa Rica earlier in the year. So I stopped him and we chatted for a few moments. I asked him if he was going to run in them and if he had run a Marathon in them (including this one in particular which I had a concern with sandals in some of the extreme downhill sections). I'm sure you can see the writing on the wall here: he was going to run in them, he had run Marathon's in them and I got the proverbial kick in the rear to put my shoes away! So that's what I did. Chalo has no idea how thankful I am for that (until now because I'm sure he's reading this!) That comfortable, confident, FUN running I was having in training directly translated to an awesome race where I BQ'ed by over 4 minutes and PR'ed by 2.5 minutes! 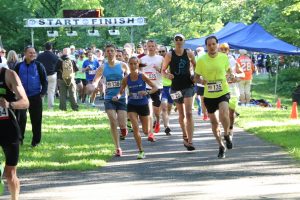 And that was it. That was the moment I decided the sandals were no longer for "playing around". The fact I had been running so much better, staying healthy if not healthier and having fun was and is more than enough convincing for me! I didn't plan it - it just kind of happened. It works for me. It's also really nice having all my toenails again! Last week I crossed the 1,000 mile point and will continue to run in this pair as long as they are comfortable. I will be picking up a few new pairs soon to try out some different models.

I often get asked if it was hard getting used to them. It definitely took some time - but I think I have a bit of an advantage having always trained in minimalist shoes (like the Merrel Bare Access 4, Saucony Type A or Salming R1's - shoes many would consider for racing). I've never run well with cushioning despite several attempts. It feels totally unnatural to me. I've had a theory that running more naturally and giving my body time to adjust and do what it was intended to do has helped keep me mainly injury free in nearly 10 years of running. So wearing sandals is really a natural progression for me.

Wow so much for a quick post! Let me wrap this up! Yes: I will be wearing the sandals in the World Marathon Challenge - with exception of Antarctica which for obvious reasons is a bit more dicey and could put the whole challenge at jeopardy. No: I do not plan on becoming a barefoot runner. I appreciate the idea but it's not for me.

Certainly if anyone wants to know more feel free to comment below or e-mail me! If you just want to tell me the slapping is annoying, sorry - I see it as encouragement for you to run faster 🙂

96 Miles of Pura Vida Back in September a close friend of mine (thanks L.A.!) shared an opportunity for a 6-day, 96.3 mile running adventure through the jungles, ...