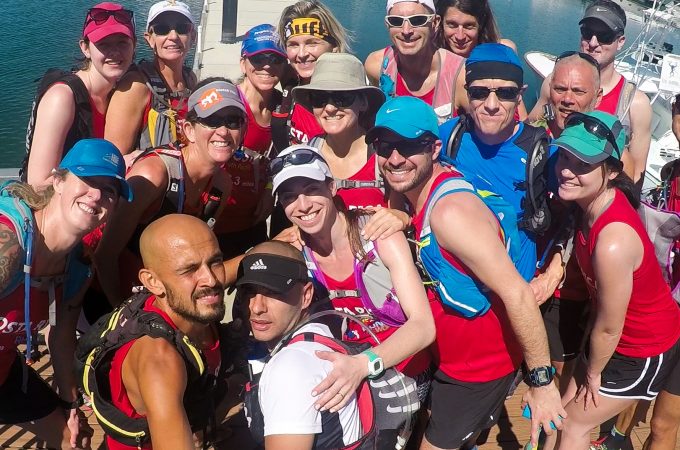 Back in September a close friend of mine (thanks L.A.!) shared an opportunity for a 6-day, 96.3 mile running adventure through the jungles, rivers and beaches of South Pacific Costa Rica. Knowing I had already committed to the World Marathon Challenge, the opportunity to run 6 days in a row certainly peaked my interest.  Ok: I wasn't immediately sold. The first thought that came to mind was what in the world in terms of wildlife would I be encountering! There are certainly crocs, poisonous snakes, poisonous frogs, pumas, jaguars & spiders to name a few! But once I put aside that irrational fear I put in my application (only 16 are accepted they make certain you have the experience, and also that you'll mesh well with the group) and anxiously awaited to hear back from Pablo - the grand master of Run the World Adventures who organized this expedition (certainly not without the help of his wife, Christina!) Well - since I've got a neat video and a lot of cool pics it probably doesn't make sense to tell you I was accepted but hey - you never know!

Fast forward to January - my bags were packed and I was San José bound where I'd meet my 15 fellow adventure runners and our expedition leaders - Pablo who I've already mentioned, Sergio who directs the Coastal Challenge, Esteban who is an amazing adventure racer, Siddhar who kept us healthy, hydrated & fueled, and Mario the best bus driver ever! After I arrived at the hotel I joined all those that had arrived by the pool as we waited for the rest of the gang to arrive and for our orientation meeting. The very first thing I noticed was how well everyone got along. Here is a group from literally all over the world that has never met and yet it almost felt like a reunion of long lost friends. I credit this not only to brilliant organizing, but also to the fact we immediately shared a common bond: running. Experience didn't matter, where we came from didn't matter: we were all passionate runners and about to embark on an epic adventure. It probably worth mentioning quite a few of us liked beer too - that helped 🙂 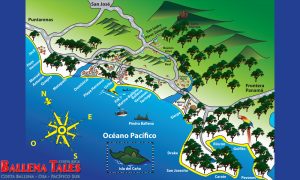 Anyway, that night we had our orientation meeting to learn what the next several days would hold for us. If you check out the map to the right, essentially we'd be meandering our way from Quepos, to Drake by running between the coastal areas, and inland through the jungles, across rivers and over mountains. We would be running in areas most tourists never see and through trails made by Pablo and his team (and that were shared by the Coastal Challenge). I think most of us found the elevation charts quite daunting! You'll see a bit of that below 🙂 After our meeting we had a nice meal together before making some final preparations and hitting the sack as the next morning would come early.

I literally could write a novel over what transpired the next 6 days. My hope is the pictures below and the video above give you a sense of some of the amazing things we experienced together. Generally speaking each day kind of went like this: wake up, pack, eat, load the bags on the bus, run for the next 8 hours or so, chill at our destination, shower, eat and sleep. Everyday held a treasure chest of amazing views, beautiful waterfalls, rivers, lush forest, prestine beaches, and most importantly: Pura Vida. Pure life - to experience Costa Rica as not many have the opportunity to, the way Costa Rican's live and to experience the incredibly hospitable people of Costa Rica. Here's a little taste of where we ran and stayed everyday along with the link to the route with those daunting elevation charts I mentioned above:

Hilly, but short coastal run to give everyone a chance to acclimate to the climate. 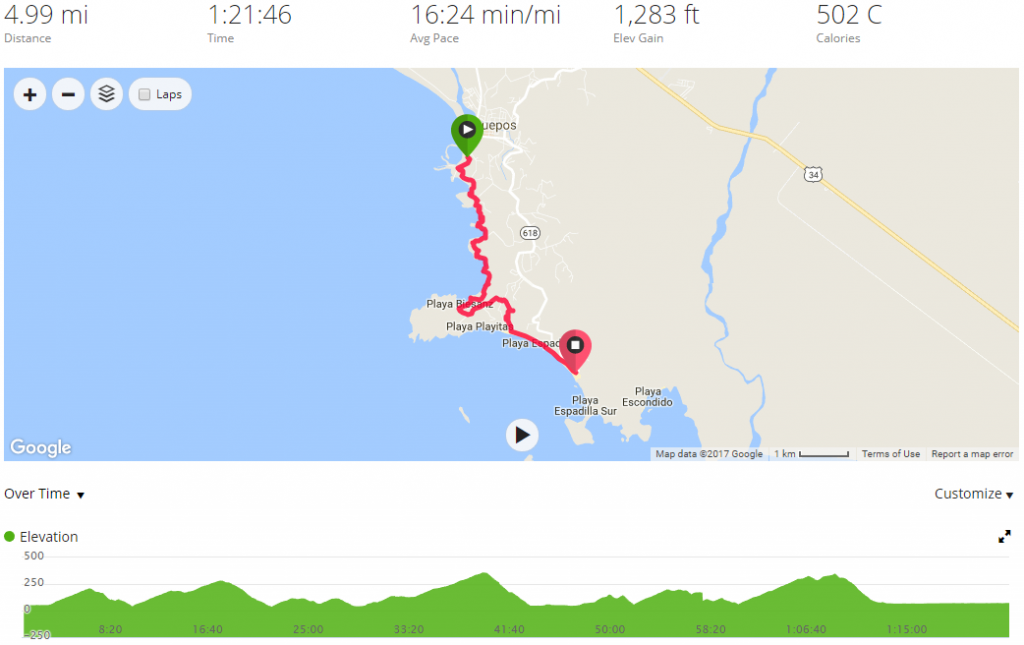 This was by far the toughest day for me. The terrain was difficult and I was drained by the end of the day. But we ended at one of the most amazing places of the trip - Buenaventura which is a privately owned retreat. A lot of what we ate was grown on premises and super delicious, we had an incredible rejuvenating river clay experience and some of the best homemade chocolate I've ever had! I will never buy chocolate against that has preservatives. 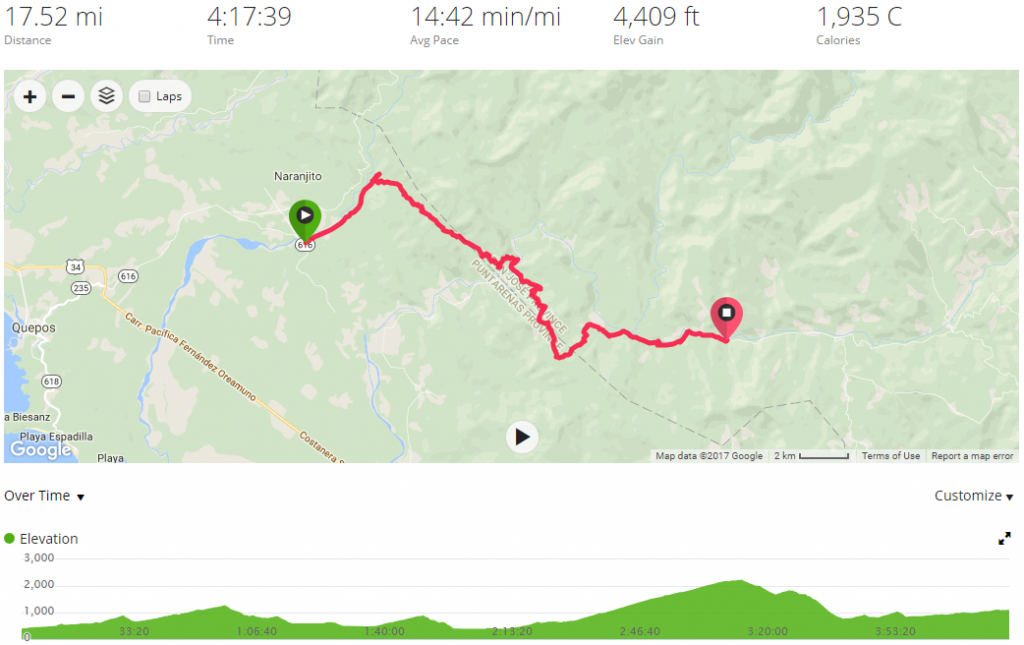 The last two miles of this were running on a relatively quiet part of the Dominical beach and then a short swim to the finish line. We saw one of the most amazing sunset's here! Feet were starting to become an issue as I had developed a few blisters and hotspots. Road shoes weren't the best choice (more on that later). 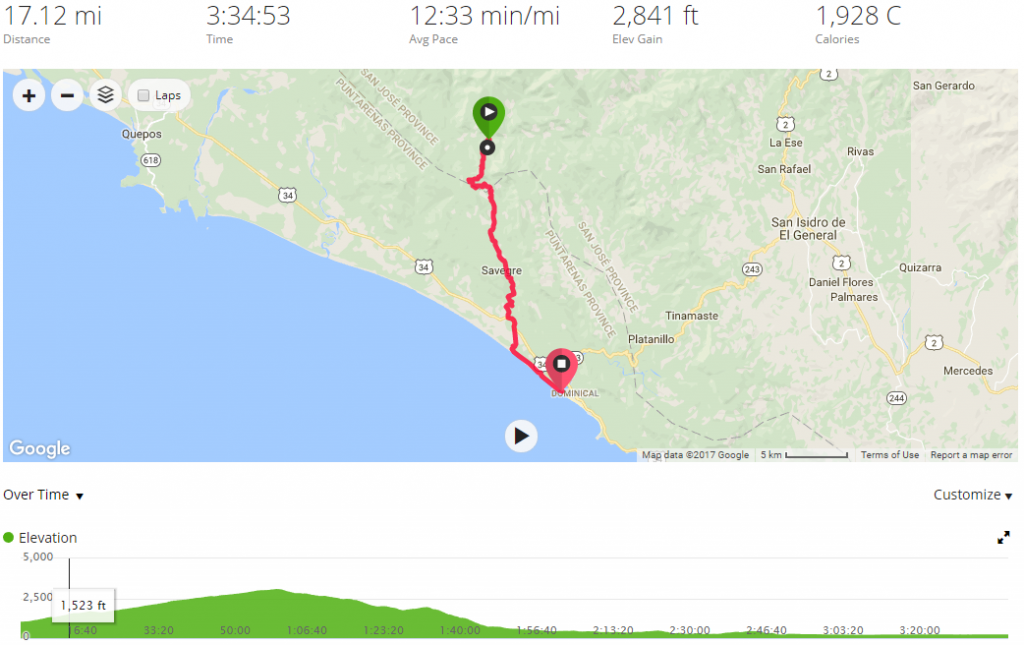 This is the day that really proved beer as mid-run hydration really works! A ton of river running and one of the steepest downhills I've ever been on in my life! Also one of the most epic waterfall's - the Nauyaca Waterfall. We arrived to Pablo's family and another breathtaking sunset. Feet are much worse from all the river running. I changed my socks at least 3 times! After everyone arrived we took a bus trip to Sierpe Mangrove where we'd stay for the night. 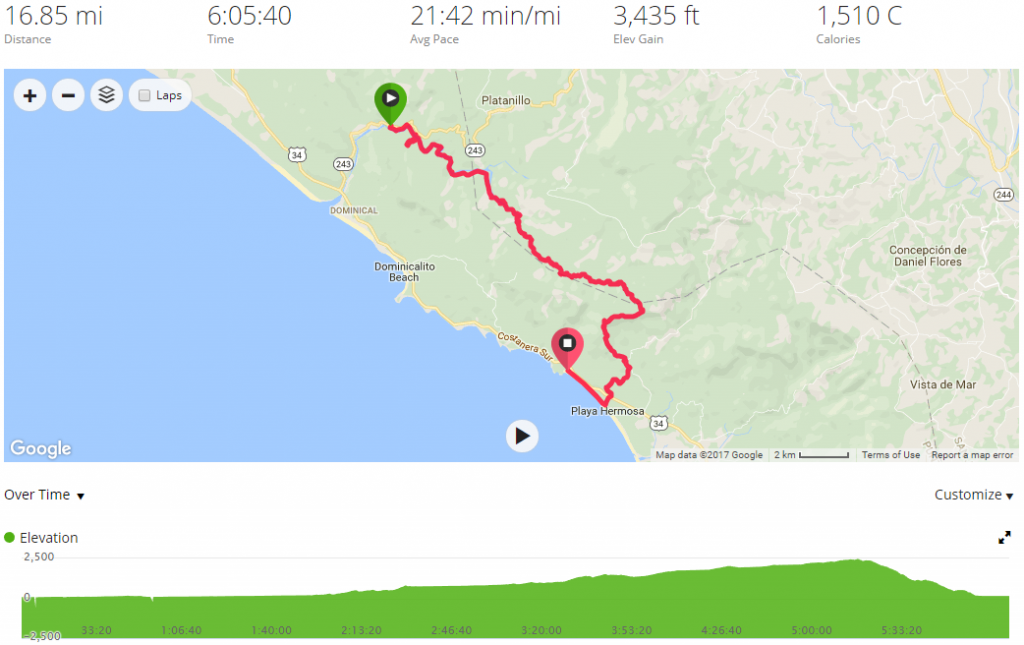 Started by taking a small ferry a bit deeper into the mangrove, followed by more jungle trails and Jeep road running. We had an encounter with a horse as well which you'll see in the video! Finished at what would be our home for the next two days and that was a great feeling not to have to worry about packing for a couple days! The lodges here were amazing. We had incredible views of beach and air conditioning! This was also my first run in with Cacique Guaro - a sugar cane based liquor made in Costa Rica akin to Tequila but much smoother. It helped ease the enormous amount of pain I was in from my feet being absolutely destroyed and likely infected. We also had one of the most amazing meals - fresh Ceviche and fresh Pargo fish which you'll see below. 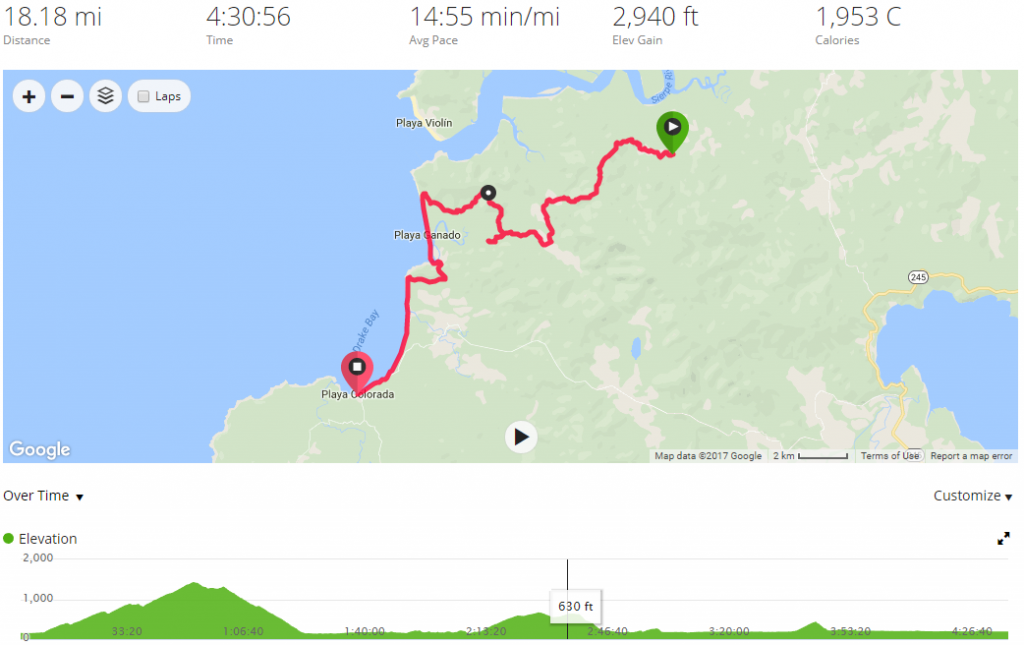 This last day was a half marathon back into the jungle then up through a wildlife refuge and mainly along the beach and resort areas. It was a great time to reflect on everything that had transpired over the last several days. It was also equally sad knowing it had come to an end and in just a few days our group would be parting ways. My feet were incredibly thankful, though! I hadn't encountered much in the way of wildlife during the trip as I'd expected but the howler monkeys made an appearance towards the end to make sure we kept our distance. And we saw a toucan! 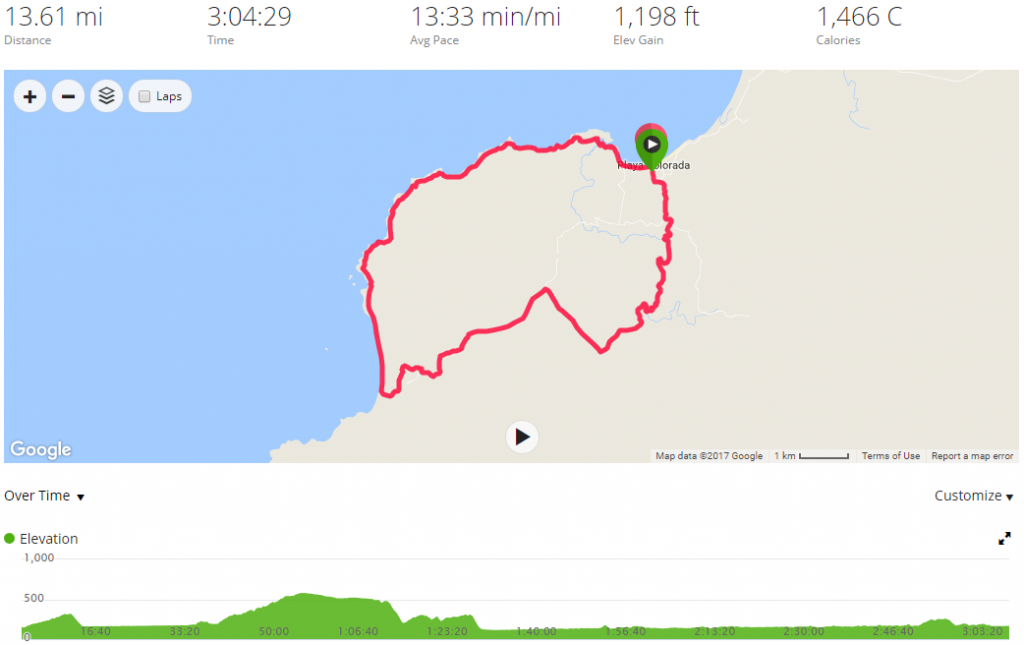 The next day we were back on the bus to San Jose where we'd eventually part ways. But certainly only in the physical sense because by the end of our 6 day journey we'd become those long lost friends I mentioned earlier. I stayed an extra day and did a little touring around San José where I caught the active volcano pic. below.

I am so fortunate to have had the opportunity and to meet and get to know everyone who was a part of the adventure and cannot wait for the next one!

Leave a Reply to Sara